Why I should have moved to Canada....

Eight years ago DH and I made the momentous decision to emigrate to South Africa from the UK. I'd spent much of my life here, my family are here and DH has a brother who has lived here for many years so it seemed a sensible thing to do. I was born in the UK but moved here when I was 11, then we went back to England, then we came back here .... please don't try and keep up as both my brother and I gave up in the end and just decided that if it was sunny when we woke up, we were in South Africa and if it was raining, it was more than likely that we were back in Blighty!!! I digress. Eight years ago we returned and for the most part it's been a great decision. DH loves it, our boys love it, and even love it 99.9% of the time. However, from a knitting point of view it's been a nightmare. I've finally realised that South Africa is not conducive to knitters. 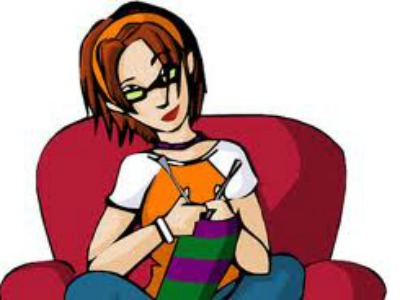 This is largely because wool shops are few and far between. In England you can count on almost every city, town and even small village having at least one wool shop. They may not be very big, in fact most of them become crowded with just the owner inside, but they're THERE.  You can love them (as I do) or leave them as many subnormal people (in my opinion) do. But again, they're THERE. 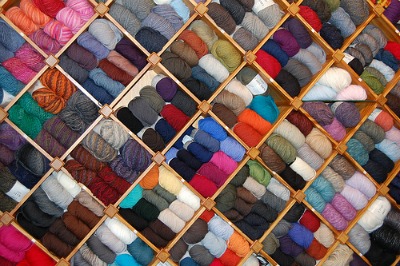 Here in South Africa, they're as rare as the proverbial money tree. Many towns I've been to don't have one let alone a selection, and when I enquire as to where the nearest one is located I'm met only with complete silence, sidelong glances and furrowed brows as though I'm speaking in foreign tongues! I learnt to deal with my ever increasing withdrawal symptoms however .... the shaking, the sweating and the tingling in my fingers..... I learnt to control it all, but it was hard.

Recently in my local town a wonderful, beautiful, exceptional and in my opinion saintlike lady named Jeannette saved me and possibly my family too, (as I was becoming more and more likely to hit out at anyone who mentioned the word 'wool'), by opening a fantastic haberdashery shop. And guess what??? SHE SELLS WOOL!!!!! Not a huge selection, but enough to keep the wolf from my door and my hands busy with needles or hook. There are few imported yarns so most of her stock is made by the only wool producing company in the country. As such I've had to deal with uneven spinning and knots every now and again where they've joined the yarn to cut costs but I'm not complaining. It is all still wool, glorious, fabulous, gorgeous wool and I would knit with string if I had to, believe me! It has, however, meant that we can never ever move from this town. We are here to stay. No matter what. Or so I thought.

The other reason why South Africa is not the place of choice to a knitaholic is quite simply, the climate. For 80% of the year the temps are 25°C and above. The other 20% of the year is cooler and we get the occasional cold spell - we've even had snow - but nothing compared to northern climes. The necessity for a wardrobe full of sweaters is just not there, and even though I knit them and fold them and put them away in the vain hope that a really really cold day will come and someone in the house will wear them, it never happens. I have four thick jerseys in my wardrobe that I've worn a total of three times. Three times...in eight years......not the stats I would like. 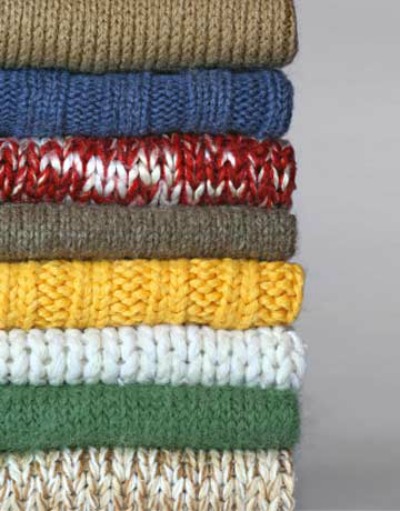 I know that I'm so very lucky to live in a country where the sun shines almost every day of the year. I now that, I promise I do. But it doesn't help. The knitter in me should have moved to a cold cold country where thick sweaters are the norm. Where they're essential every single day. Where I could cable and aran to my hearts content knowing that next year I'll have to do it all over again cos my boys would have grown out of this year's supply. Where every city, town and village has a wool shop. Where I can knit in public without people gawping at me like I'm some sort of alien. In short, I should have moved to Canada.


9 comments:
Email ThisBlogThis!Share to TwitterShare to FacebookShare to Pinterest

Whilst the rest of the world seems to be knee deep in snow, we here in Africa are enjoying the last of the summer days and have even begun to experience the chilly mornings and evenings of autumn. Sensing that winter was only just around the corner and having a very minimal winter wardrobe,  I recently splashed out and purchased a new winter jacket - a lovely fleece type affair with a woolly lining and a snuggly hood. Perfect for playground duty at school as well as for fighting off those early morning chills! The only problem was the colour choice ... either a dark schoolgirl grey or a winter white. Nearing my 50th year I feel that my schoolgirl days are welly and truly over so the grey was never really an option. That left the winter white. I loved the jacket but not the colour so what could I do to brighten it up, to stop it from making me look like a living corpse? Answer: a bright jewel-coloured cowl to wind around my neck on those bitter African winter mornings. I wandered around my local wool shop and finally chose this yarn - 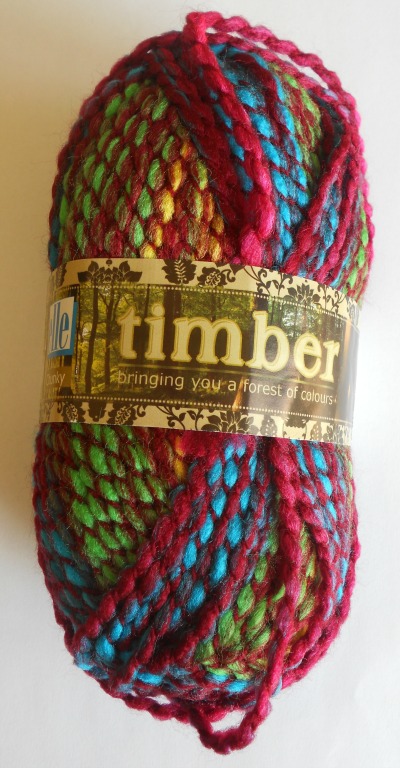 It's Elle Timber and I love the slogan for this wool - "Bringing you a forest of colours." Perfect. It comes in a variety of colourways and being a sucker for anything green I nearly chose the lime green option but then decided on the above for its versatility. It really is bright although you can't really tell from the pic. I started knitting it up on Wednesday and I finished the cowl half an hour ago. It's a chunky weight wool so with a size 6.5mm needles, twenty five stitches and 3 balls of wool later I have this: 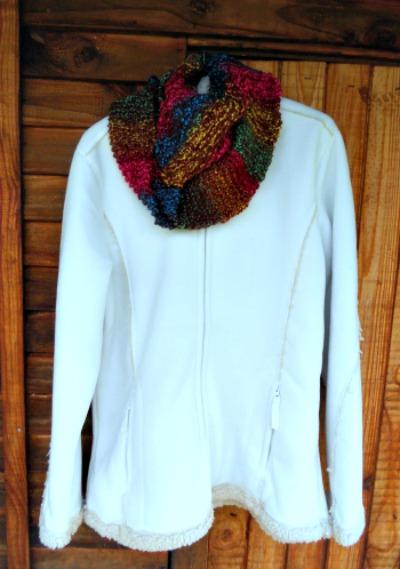 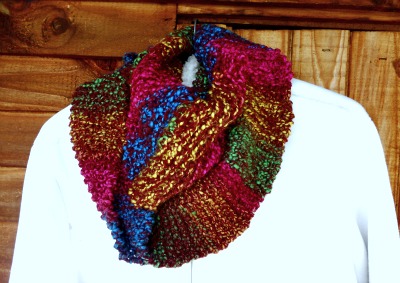 And when the mid-morning temps rise a little I can wear it like a normal scarf..... I think it came out pretty well and soooooo quick which is always a HUGE bonus for us knitters! I think it will do the job and if it doesn't, I can always use it to practice my lasso skills!!!

By the way, my mom finished another blanket last week so I thought I'd show you. Even at the tender age of 72 she's still a knitting demon!!! 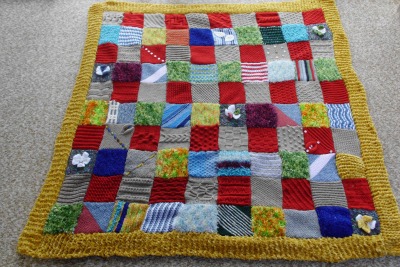 Don't you think it's cute? I love the little flowers. So clever.
Hope your week is good.
Til soon.
x