(Authors note: When I talk of knitting I do, of course, include crochet. I wouldn't want to offend anyone.....) 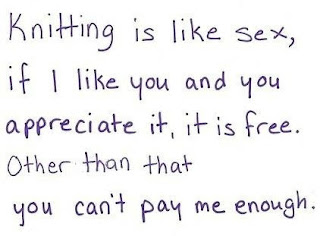 This is something I think ALL non knitters should understand! I LOVE making things for people who genuinely appreciate the work, time and effort that has gone into creating it but I don't (and won't) make things for people who see me in one of my jerseys and say "That's so beautiful! Will you make me one?" as if I could quickly run one up before dinner! In fact, I wouldn't knit them a fire extinguisher if they were on fire!!!! 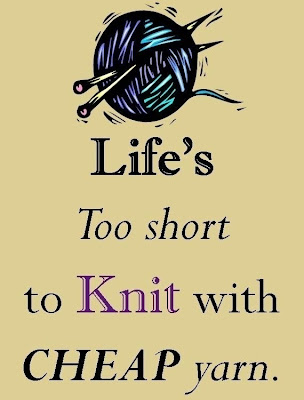 Only fellow yarnaholics will appreciate this one. You see, in my humble opinion, there's always a place for the good quality acrylics that are out there - especially here in Africa where knitting with pure wool means you'll end up with a garment that looks mind-blowing in your wardrobe but you'll NEVER wear because of the heat - but there are just soooooo many beautiful, stunning (but sadly) expensive yarns to be had that I have been known to completely change the project just so I can buy one or two tiny balls of exquisite yarn goodness! I've also been known to purchase such yarn and then put it in my yarn cupboard where I spend some considerable months quietly whispering to it whenever I open the cupboard door about what it may (or may not) grow into or stroking it surreptitiously when no-one else is watching...... The fact that the cost of such yarn could wipe out the debt of a small third world country has nothing to do with it. DH doesn't understand (how could he, he doesn't knit) but there are only a certain number of days in anyone's life that are free to knit (or crochet), so why waste them on rubbish yarn??? I buy what I can afford but always buy the BEST I can afford .... I guess that could go for any purchase but it's definitely my personal mantra for yarn shopping! 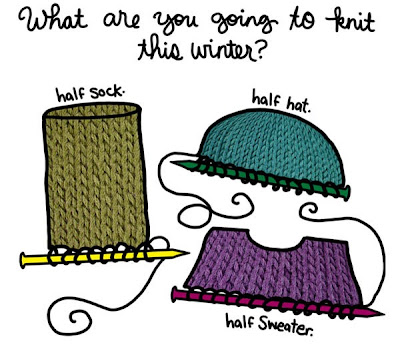 If you ever meet a crafter who says "I never start another project until my current WIP (work-in-progress) is finished" - take it from me, SHE'S LYING!!!! You cannot qualify from The World College of Crafting until you have at least 2 UFOs (Unfinished Objects) stashed away somewhere in your house. These are NEVER in your yarn cupboard by the way - because then you would see them almost every day and be forced to either frog them (unpick) or finish them (God forbid) - but rather are (a) squashed into a grocery bag (never one of your favourite WIP bags) and forced under your bed, (b)  pushed to the very back of another cupboard (usually one that houses all those gifts that you hate and are never going to use) or (c) shoved up in the loft (if you're lucky enough to have one)!
And there they stay, usually until you move house ..... 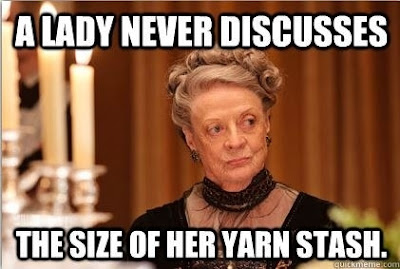 And then we come to the subject of a knitter's yarn stash. What can I say? Perhaps only four things:
1. It exists so don't let anyone ever tell you it doesn't.
2. It's as important to the knitter as oxygen so denying her this absolute necessity is akin to standing in front of an oncoming train.
3. It only grows - like an alien creature it does not have the capacity to shrink or "become less" (such a strange concept).
4. You will need to re-mortgage your house at some point to pay for it.
And that is all I have to say about that. 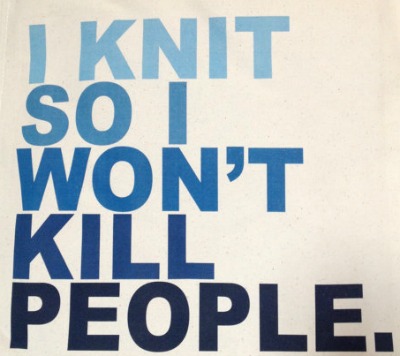 Fact: Knitting is great therapy. It's true that when denied their sticks and string knitters have been known to kill small animals and children (I rarely fly anymore for fear of taking out a fellow passenger due to frustration - let's face it, reading just doesn't cut the mustard!). So please, I beg you, when your knitter gets that glazed look in their eyes and their fingers begin to twitch, never ever stand between them and their craft. Just smile knowingly and remember that after just a few short minutes, normal service will be resumed. Thank you. 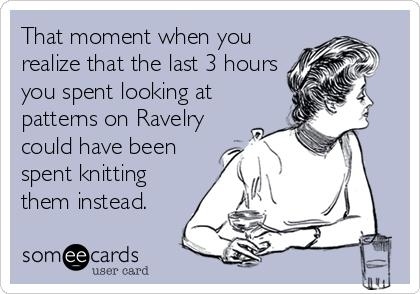 I've come to the conclusion that if you're not careful technology can (and does) seriously encroach on your knitting time. I have often spent an entire afternoon flitting through Ravelry, Patternfish and Pinterest (the devil incarnate) with my knitting right beside me but not a stitch gets done. I won't mention the blog following that absolutely and most definitely has to happen because I really need to know who has walked down which lane in the past 24 hours or taken the most stunning photo...... Need I say more? Well all do it.

So on those pearly words of wisdom I leave you now. Hopefully not to go and make something for someone who won't appreciate it, nor go out and buy cheap and nasty yarn, nor deny all those UFOs that you have lurking around your house, nor further deny that you have a literal mountain of yarn stashed away and yet your children are starving, nor to say that you live to knit and not the other way around, nor to spend the next 3 hours on the internet looking at all the things you're going to make......
No. Rather let me leave you with this - 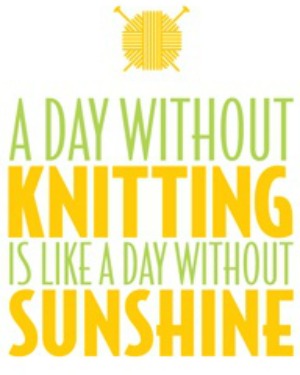